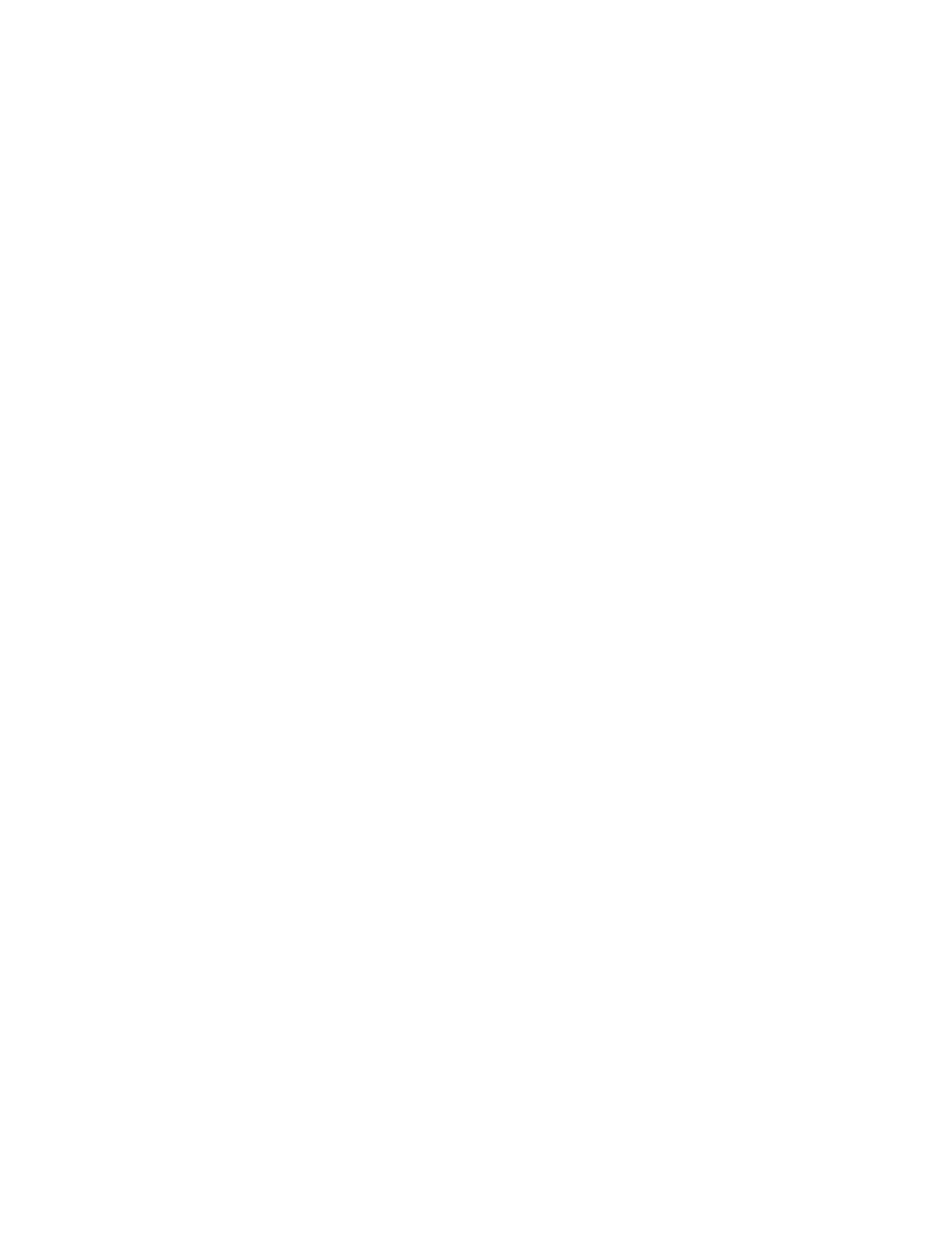 It's not just the virus

The pandemic exposed the hate policy that Apib had already denounced. Political violence and persecution have further accelerated.

The Federal Government is the main transmitting agent of the virus among indigenous peoples. Failure to build effective actions to fight the pandemic, neglect to protect workers and users of the Indigenous Health Subsystem and the promotion of policies that favor the invasion of indigenous territories are the main factors in this context of violations. 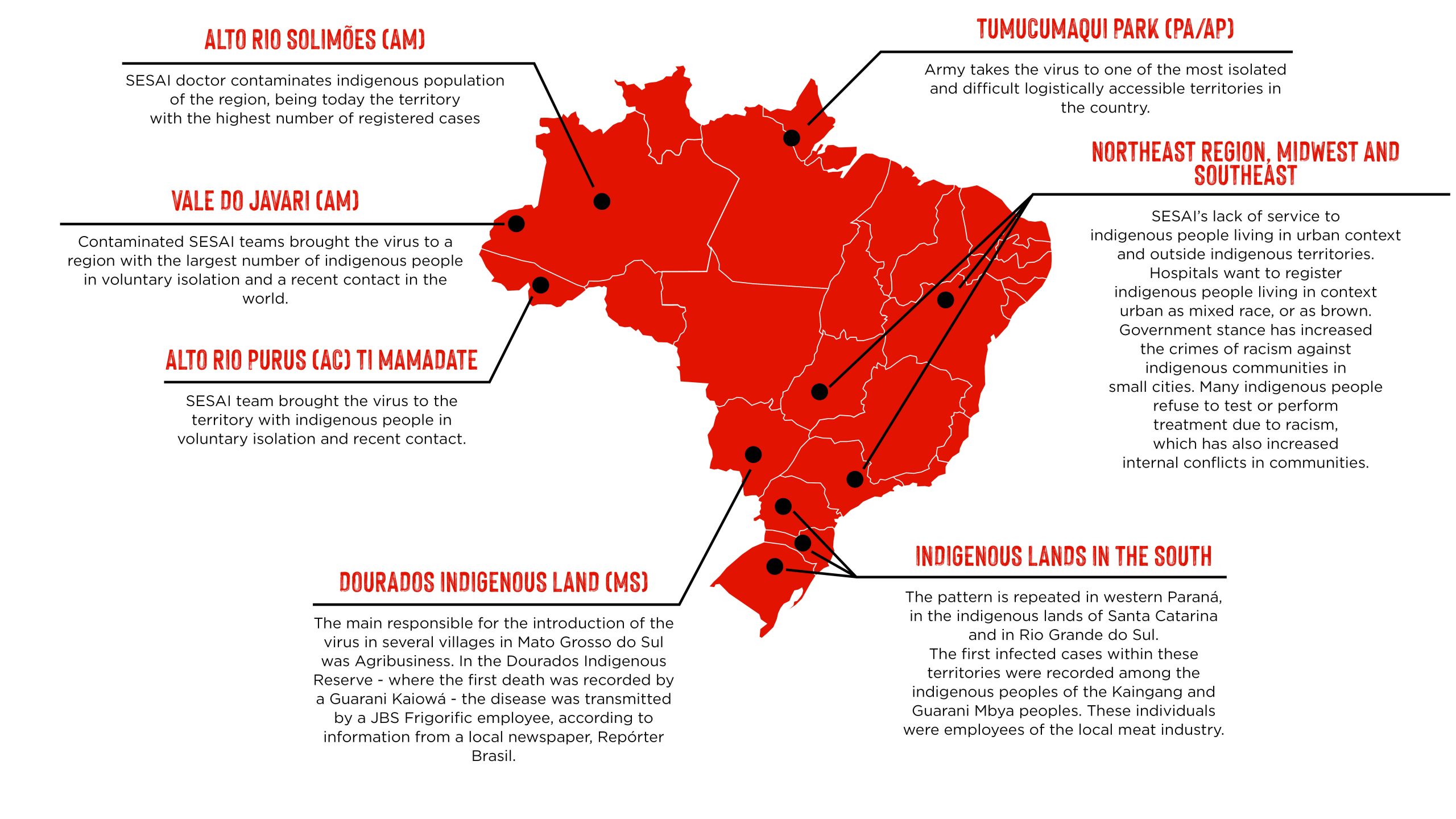 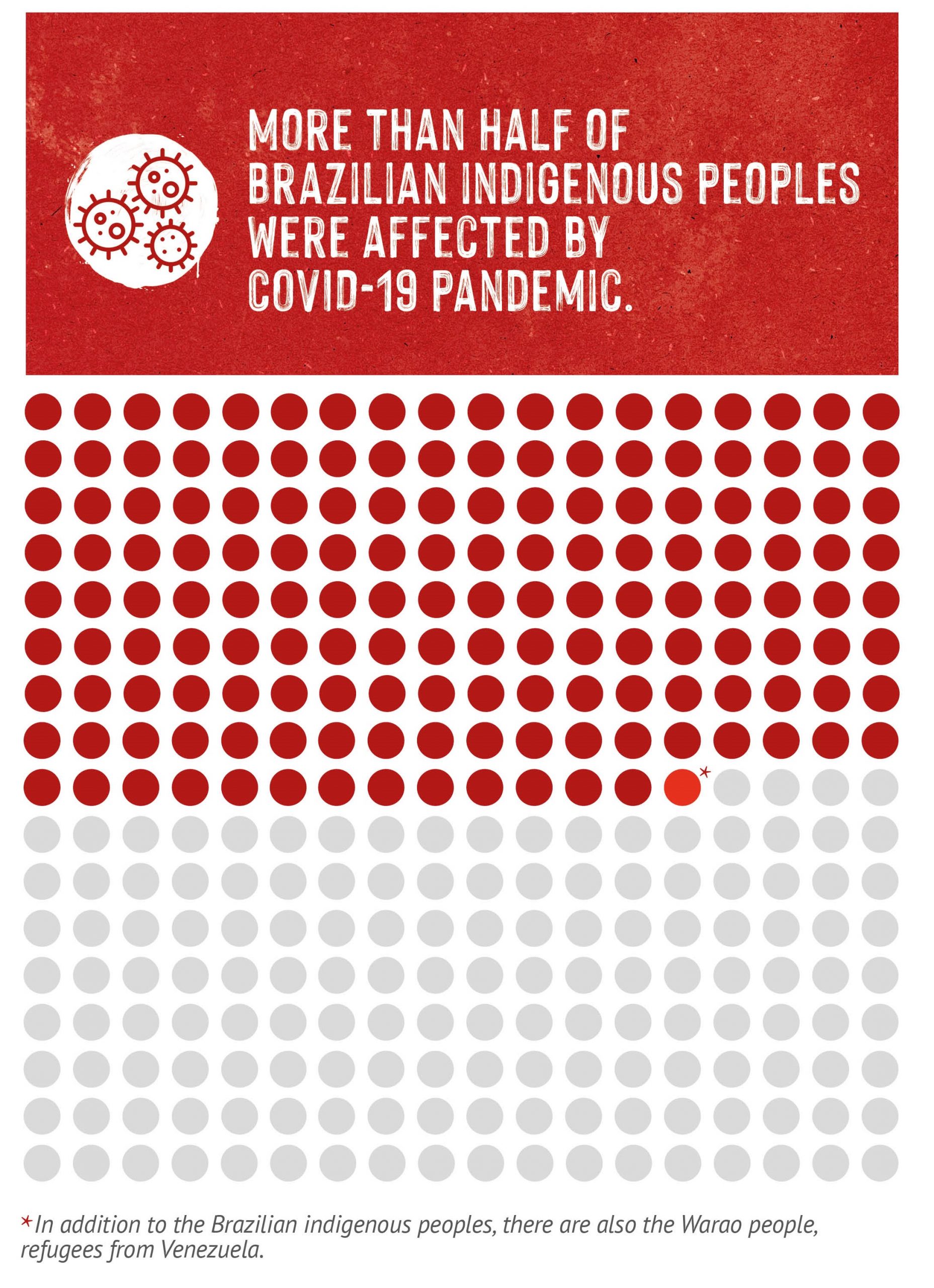 By December 2020, more than 41,000 indigenous people had been infected by the new coronavirus, affecting more than half of the 305 people living in Brazil, including also the Warao people, a refugee from Venezuela. , and all of our grassroots organizations, with representations in the five regions of the country, in the face of the Covid-19 pandemic, we fight daily for the lives of the peoples. It was between the months of March to November 2020, that violence against peoples indigenous peoples have increased within and outside our territories. The criminals who invade our lands have not been quarantined, let alone home office. We affirm that the worsening of violence against indigenous peoples during the pandemic was encouraged by Bolsonaro.

Our fight is for life

SIGN THE MANIFEST FOR SOLIDARITY WITH INDIGENOUS PEOPLES IN BRAZIL

From March to December, more than 200 fundamental human rights violations against indigenous peoples were recorded. An alarming situation that gets worse every day.

Violations of indigenous rights that are financed by large global corporations increased the vulnerability of indigenous peoples during the Covid-19 pandemic.

BlackRock, Citigroup, JP Morgan Chase, Vanguard, Bank of America and Dimensional Fund Advisors invested more than US $ 18 billion, only from 2017 to 2020, in companies whose activities are involved in invasions, deforestation and violations of indigenous rights in the Amazon.

Read the report "Cumplicity in Destruction"

The growth of illegal deforestation in and around indigenous territories became more serious in 2020 due to the Covid-19 pandemic. After the deforestation came fires.

In 2020, forest fires already had the worst rates in recent years, threatening the lives of thousands of people and strongly impacting the Pantanal, the Amazon and the Cerrado.

Along with the different forms of violence caused by invasions in indigenous territories, illegal deforestation represents one of the main threats today for indigenous people and for the planet’s climate crisis. 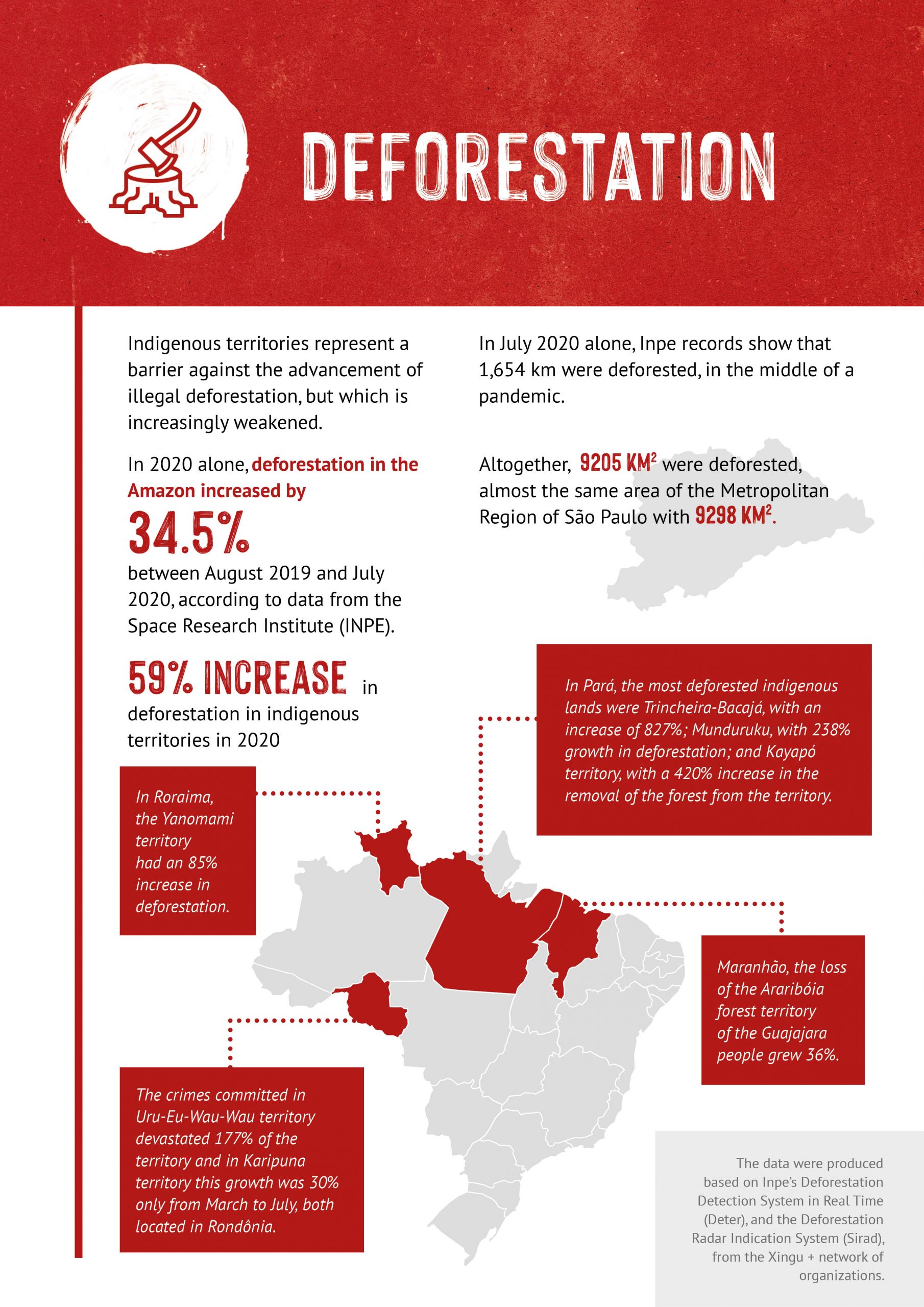 In this report, we make an alert about the situation of the Guató and Xavante peoples in the context of pandemics and fires. 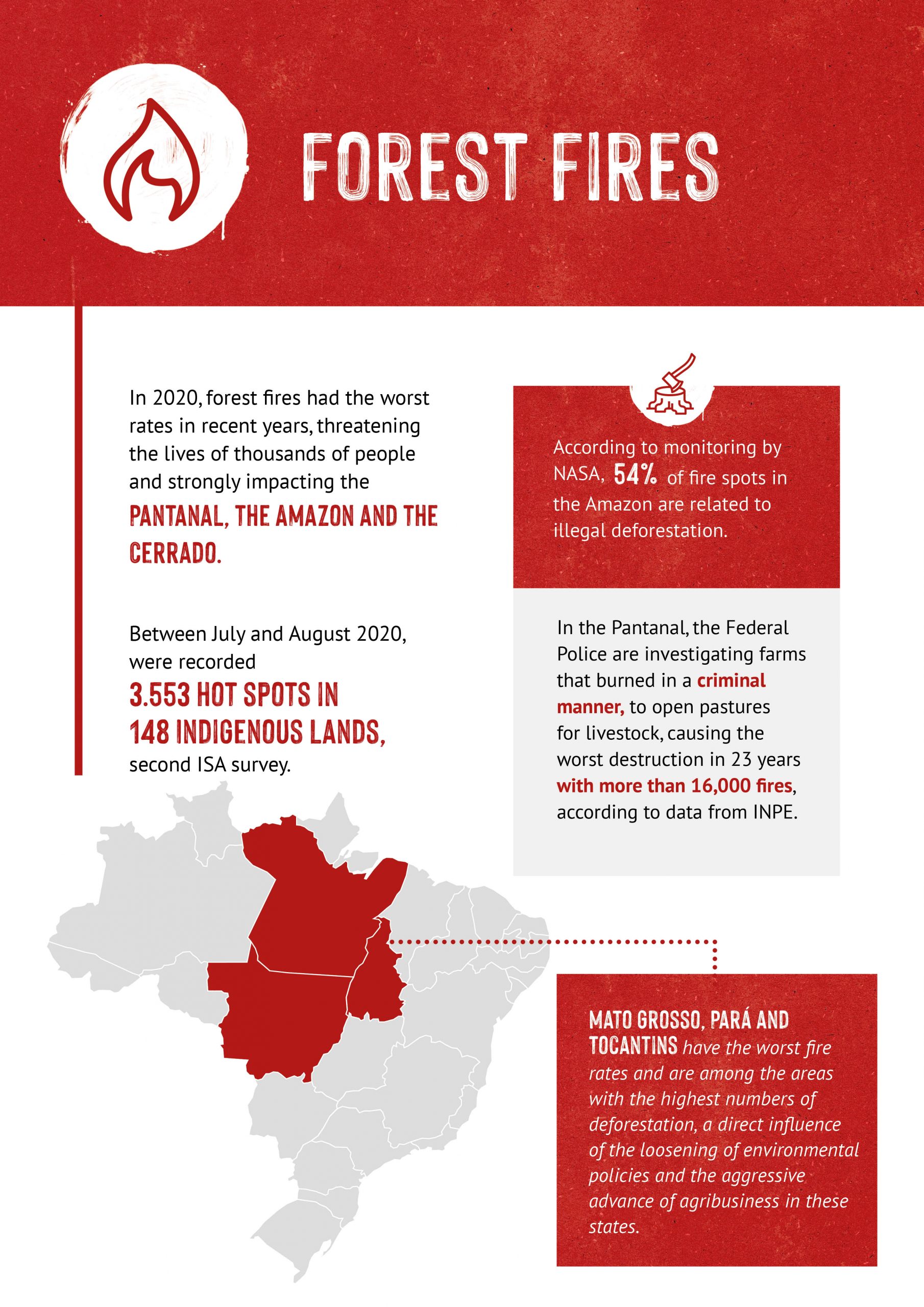 Many of the impacts mentioned on the worsening of Covid-19 among indigenous peoples are a direct result of the activities necessary for the advancement and maintenance of agribusiness, which has been developed in an unbridled and criminal manner in many states. 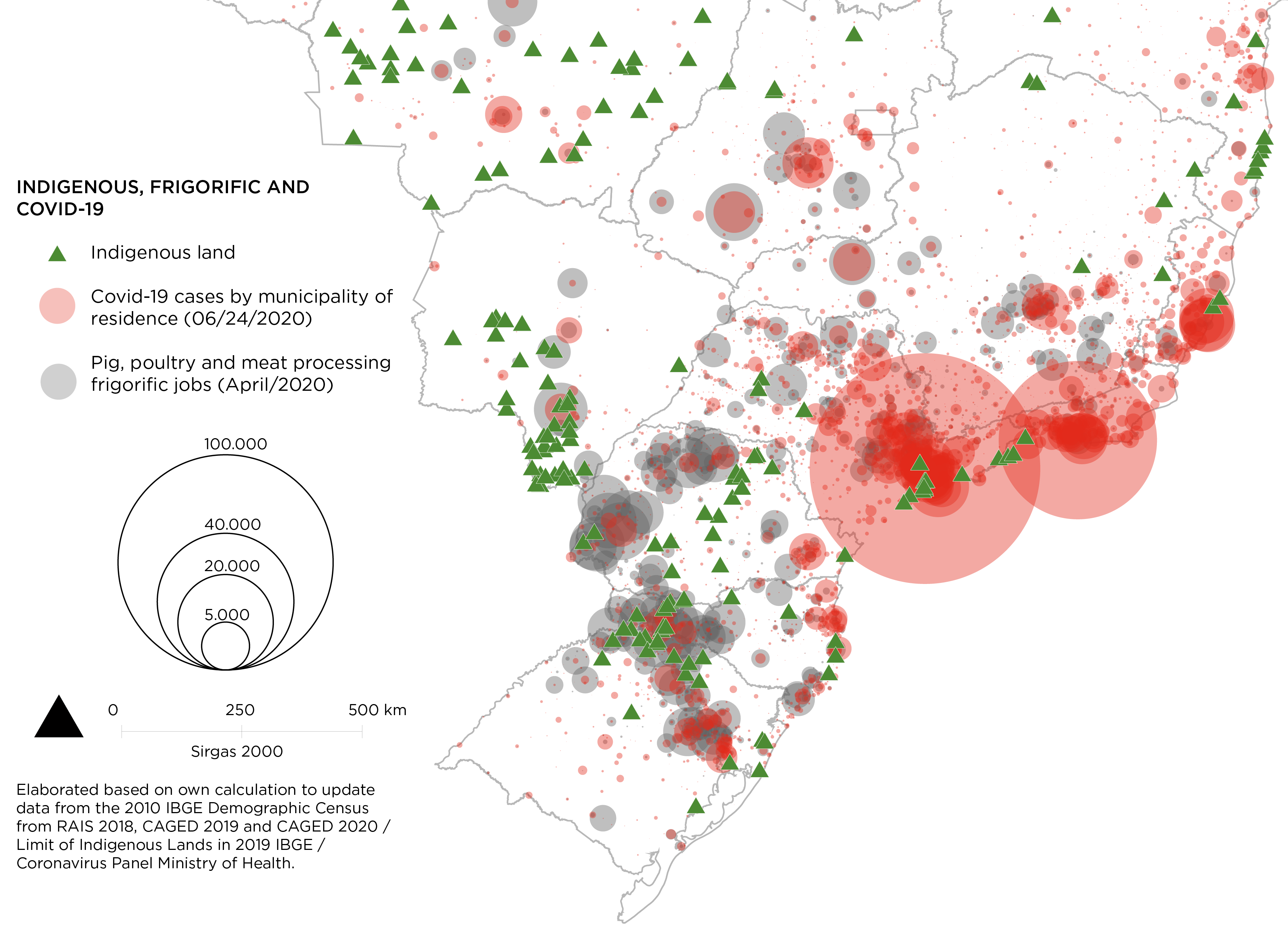 Deforestation and fires are not the only negative consequences of agribusiness in this pandemic period. The chain of slaughterhouses spread in regions close to many villages in the South and Midwest regions was one of the main vectors of entry of coronavirus in indigenous communities in these regions of the country.

Agribusiness was the main responsible for the entry of the virus in several villages in Mato Grosso do Sul. In the Dourados Indigenous Reserve, where the first death in the state was recorded by a Guarani Kaiowá, the disease came through an indigenous worker from a slaughterhouse, according to information from Repórter Brasil.

In the eight months of the pandemic, 58 Terena died due to Covid-19, in Mato Grosso do Sul. It is the third people with the most registered cases of death by the National Committee for Life and Indigenous Memory. Between the months of July and August, cases of death among the Terena people increased by more than 500%.

When we speak the word GENOCIDE, we address the set of actions and positions of the Bolsonaro government that collaborate with the illness and death of thousands of people in Brazil. Among indigenous peoples, GENOCIDE is present in our history from the European invasion to the present day.

In this context of a pandemic, the government publicly exposed its policy of genocide when it vetoed, on July 8, 22 items of Bill No. 1,142 / 2020, which creates measures to contain the impact of the spread of the virus among indigenous people, quilombolas, artisanal fishermen and other traditional peoples and communities, by enacting Law No. 14.021, of July 7, 2020.

Bolsonaro and his government vetoed, among other fundamental items, the government’s obligation to guarantee access to drinking water, hygiene and hospital beds for indigenous peoples. The National Congress even overturned 16 of the total of 22 vetoes, on August 19. However, among the vetoes that were maintained are those that guarantee a budget for the implementation of the planned actions.

The question we, at Apib, ask is: how many indigenous people need to die for the government to implement an emergency plan? 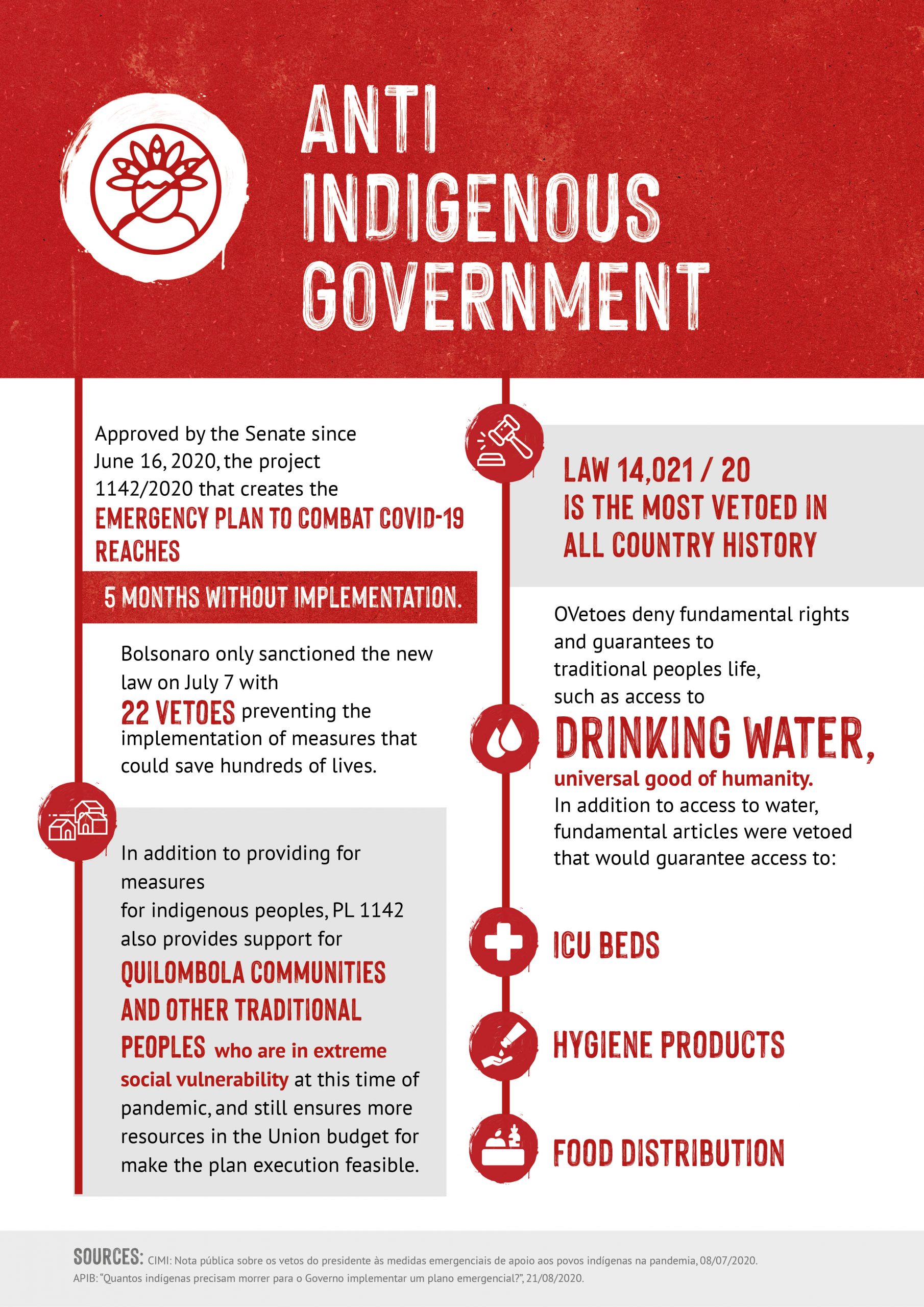 In addition to directly intervening in the structures of indigenous agencies and institutions, the Federal Government allows and promotes a series of violations of constitutional and human rights. Until May 2020, the current government certified 114 farms in the land management system (Sigef), which overlap non-approved indigenous areas, contrary to previous legal opinions. Together, these farms occupy more than 250 thousand hectares of indigenous areas. The criminal invasion of traditional territories is publicly encouraged by the Federal Government in the middle of a pandemic. 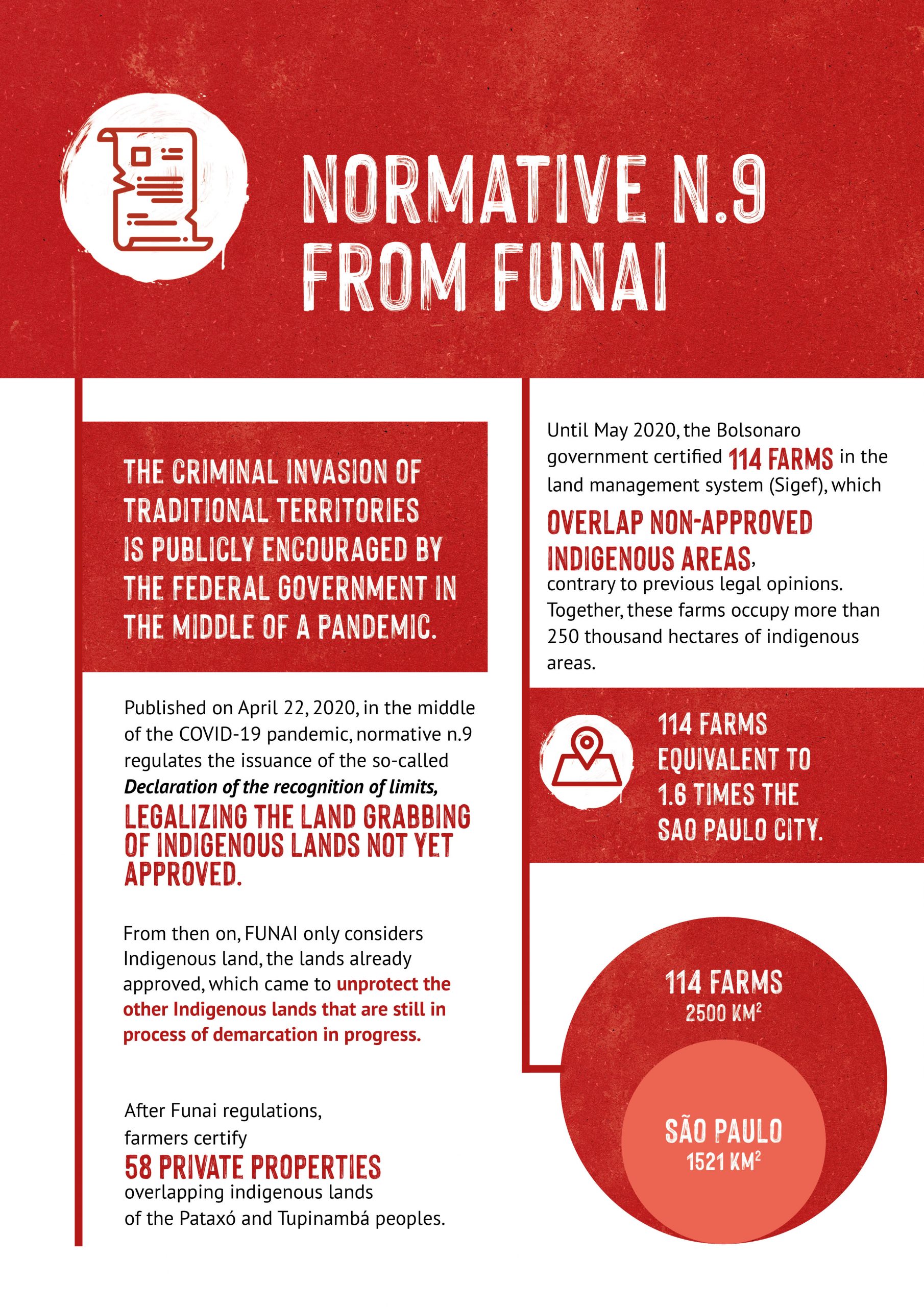 It turns out that we decided not to die

but to fight tirelessly in defense of life.

It turns out that we decided not to die

but to fight tirelessly in defense of life.

In the midst of the current health crisis, the Indigenous Front for Legal Confrontation provided a historic feat in the Supreme Federal Court (STF) for the rights of indigenous peoples. Now, the country’s main Court recognizes the Apib’s legitimacy to file a direct action at the Supreme Court, which previously was only allowed for organizations, such as political parties and class entities, such as the Brazilian LawyersAssociation (OAB). 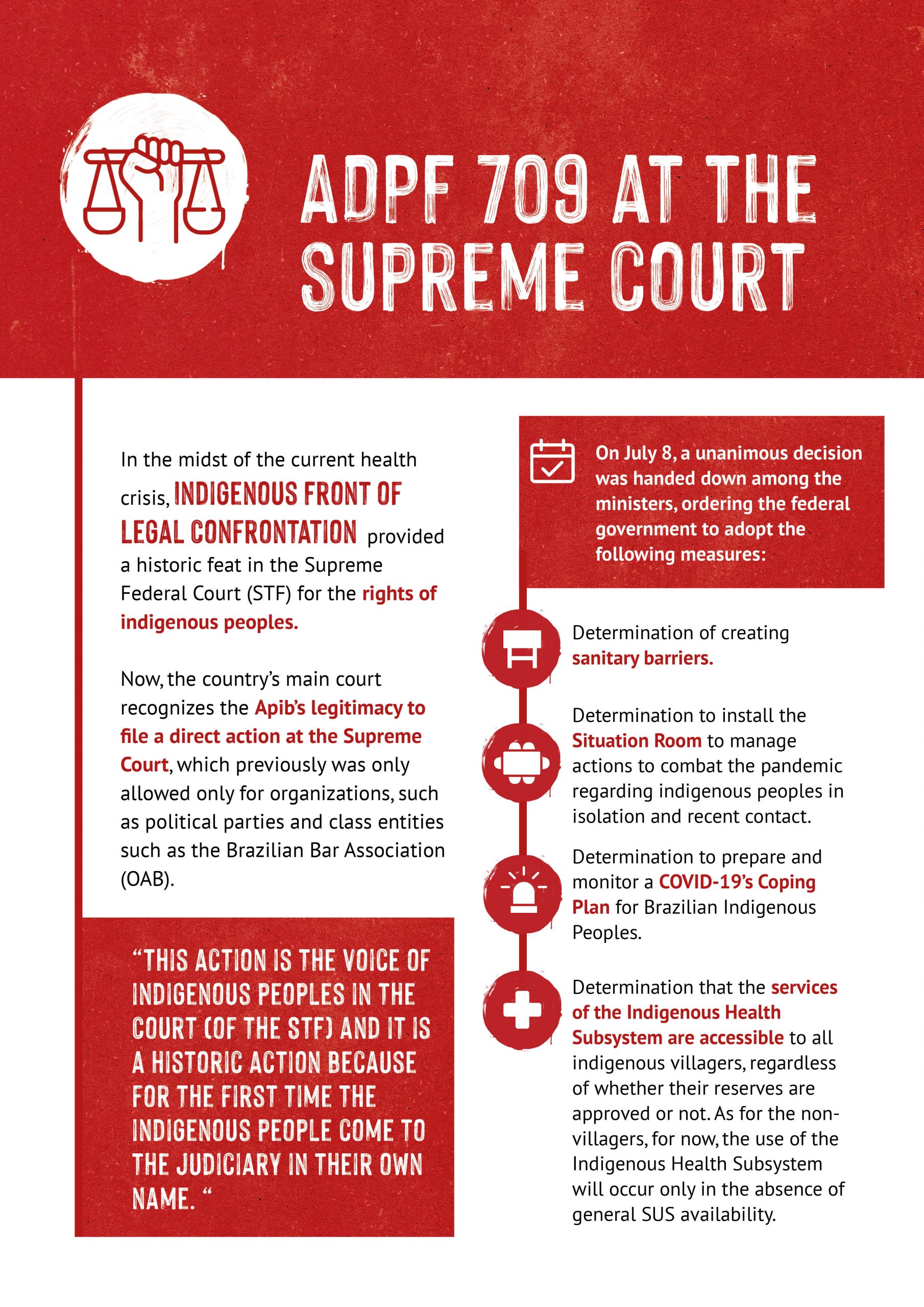 The relevance and validity of the community surveillance mechanisms is highlighted when faced with a context of underreporting and lack of transparency, both from the public health system (SUS) and the Indigenous Health Information System (SIASI), regarding data on the impact of the pandemic on indigenous peoples, and on the advance of Covid-19 in the territories.

We emphasize that the current initiative of the indigenous movement finds precedents in debates, since the 1970s, on the prerogatives of social participation in Primary Health Care, in which it is recommended that governments encourage and ensure the participation of communities in health actions.

The question of the lack of the most basic data, such as the size of the indigenous population and the number of peoples, made non-governmental organizations such as the Indigenous Missionary Council (CIMI) and the Indigenous Documentation Center (CEDI), in the late 1970s, to carry out population surveys in the most diverse regions of the country.

There are concrete and well-documented examples of the fact that, in time periods that are not very distant, the agenda for data production was extremely important not only to make indigenous issues more visible, but also to provide inputs for the elaboration of specific public policies. This was the case for initiatives by indigenous and indigenist organizations in the 1970s and 1980s that, in the absence of reliable government data, were directly involved in the production of population data, which came to have important impacts on the recognition of indigenous rights.

In the 1980s, young indigenous leaders, many of them linked to the Union of Indigenous Nations (UNI), participated in events in which these population data, of unofficial origin, were debated. There is even documentation that points out that these data collection initiatives by civil society, in addition to influencing the constitutional text, played a role in the inclusion of the “indigenous” category in the 1991 Demographic Census.

These data, published in various publications by indigenous and socio-environmental entities, were of great relevance in the debates during the 1987-1988 Constituent Assembly, giving rise to a new constitution that recognizes important indigenous rights.

Another example took place in 2002-2003, when a participatory census was conducted with the Sateré-Mawé people, whose lands are located in the western region of the state of Amazonas. This initiative, called Participatory Socio-Demographic Diagnosis of the Sateré-Mawé Population, involved the collaboration of demographers, leaders and indigenous communities and also sought to raise the indigenous population residing in the cities of the region. In the city of Parintins, for example, while the participatory census counted 512 people from the Sateré-Mawé people, the 2000 Demographic Census had identified less than 100 indigenous inhabitants, of different peoples. 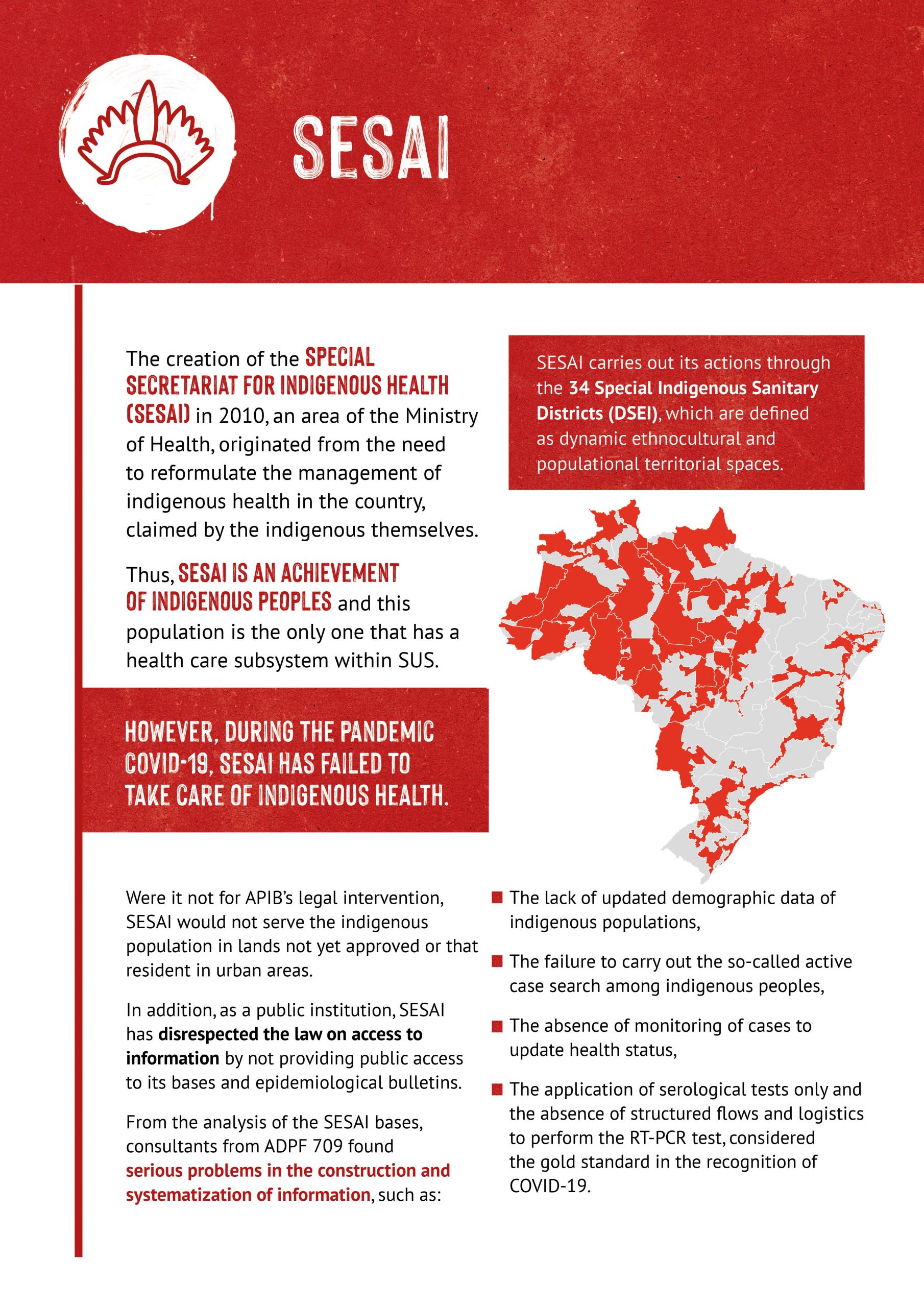 Our right to exist

Apib has intensified its legal actions in the past nine months to guarantee the defense of the constitutional rights of indigenous peoples in the face of the worsening of the attacks suffered during the pandemic. During this period, the Indigenous Front for Legal Confrontation was strengthened to enable the construction of strategies, the formalization of complaints in different instances of the judiciary and the monitoring of important legal processes for the defense of indigenous leaders, communities and organizations. We emphasize, in this report, that the intense activity of lawyers and indigenous and indigenist lawyers must be understood in the light of the protection of socio-biodiversity and the defense of ancestral relations with the territory and nature.

See the timeline of legal actions below>

PANDEMIC IS NOT OVER

AND WE WILL KEEP FIGHTING FOR LIFE.

From fear, silence, death and terror,

PANDEMIC IS NOT OVER

AND WE WILL KEEP FIGHTING FOR LIFE.

From fear, silence, death and terror,